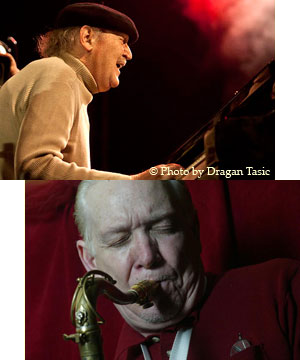 Larry Vuckovich, invites you to join him for his celebration of life and music, further enhanced by Middle-Eastern appetizers and wine/beer. Larry plays his exquisite piano solos and then has the versatile reed player Noel Jewkes join him on a jazz journey that navigates through swinging bebop/post bop/hard bop, film noir jazz, down-home blues/funk, Afro-Cuban salsa/romantic boleros, Brazilian, and world music of Balkan gypsy-Roma/flamenco.

Larry Vuckovich brings an authenticity and musical depth to his music drawn from his deep experiences of working with legends from various jazz influences from Dexter Gordon, Philly Joe Jones, Don Byas, Jon Hendricks and Billie Higgins to today’s masters, Tom Harrell, Charles McPherson Charlie Haden. He’s played with a Who’s Who listing of jazz masters during his years on the New York and international club and festival scenes, and as house pianist at both Keystone Korner in San Francisco and at the Domicile in Munich. He also reflects influences stemming from his Balkan, Montenegrin birthplace that have earned him recognition as a pioneer in jazz-world music, culminating in his 1980 LP, Blue Balkan, with noted vibraphonist Bobby Hutcherson. Its reissue with added material won a Village Voice pick among the top jazz CDs of 2002.

He has recorded on such labels as Concord Jazz, Palo Alto Jazz, Inner City Records, Hot House, and currently on his own Tetrachord Music label, producing top charting CDs, including his current Somethin’ Special with guest tenor saxophonist Scott Hamilton. The 2010 CD ranked #3 on the national jazz radio charts, remaining on the charts for seven months. He has brought his Jazz-Latin quartet to many prominent venues, including Lincoln Center's Dizzy's Club Coca Cola in New York, where he also appeared as a guest and performed with pianist Marian McPartland on her popular Piano Jazz show, aired on NPR affiliates globally. He has also drawn the attention of the American film world, including noted critic Leonard Maltin, who has written highly favorable reviews of his recent CDs.

Noel Jewkes is a master of several instruments and styles, he is at home performing Lester Young tenor sax style as well as the avant-garde sounds of John Coltrane. He is also one of the top clarinetists in jazz today, who can recall the traditional style of Barney Bigard and the bebop language of Bird. Noel is one of the premier saxophonists in Northern California, and has been part of the San Francisco music since the '60s, when he played with a number of blues and rock bands, including those of Michael Bloomfield and Nick Gravenites. Moving to San Francisco in the '60s, he performed regularly with Jon Hendricks, appearing on Jon's In Person at the Trident album. He toured with Jon in the Evolution of the Blues production with Jimmy Witherspoon, and also worked with Billy Eckstine, Mel Tormé, and Rosemary Clooney. Jewkes has performed and recorded with Jerry Hahn, Jack DeJohnette, and Ron McClure, and more recently with Larry Vuckovich, Dave Ellis, Mary Stallings, Paula West, Weslia Whitfield, and Mimi Fox. Phil Elwood, late SF Examiner critic, wrote: "I don't know of a better contemporary modern saxman any where". noeljewkes.com.