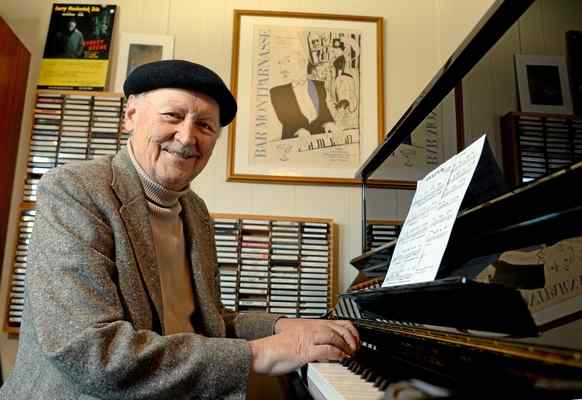 Larry Vuckovich isn’t just Bay Area jazz royalty. With his exquisite touch, encyclopedic command of modern jazz keyboard idioms and uncommon rhythmic facility, the pianist is one of the few active players on the scene with direct ties to bebop’s founding generation.

As his 80th birthday approaches on Dec. 8, the popular, amiable musician is marking the milestone with concerts that pay homage to the masters who mentored and inspired him as a jazz-besotted young refugee from Communist Yugoslavia. He arrived with his family in San Francisco in the early 1950s, a moment when the city’s nightlife rivaled any spot east of New York City. He eagerly took it all in.

“When I started going out in high school, we’d sit in the special teenage section of the Black Hawk, and the music was unbelievable,” says Vuckovich, who kicks off his birthday gigs Sunday with a sold-out show at the Bach Dancing & Dynamite Society, featuring vocalist Jackie Ryan, reed master Noel Jewkes and guest percussionist John Santos.

“I heard the original Modern Jazz Quartet with Kenny Clark. I heard Cannonball Adderley’s first band. Oscar Peterson’s trio with Ray Brown and Ed Thigpen. And Miles Davis with John Coltrane. To tell the truth, I couldn’t quite get ‘Trane at the time. What was most impressive was Miles’ rhythm section with Red Garland, Paul Chambers and Philly Joe Jones,” he says.

Years later, Vuckovich toured internationally with Jones, one of the rhythmic architects of the blues-steeped hard bop sound introduced by Davis in the mid-1950s. But from the start of his professional career, he absorbed the rhythmic currents sweeping into jazz from Latin America.

Before Stan Getz and Charlie Byrd introduced bossa nova to American audiences, Vuckovich learned about the subtle samba-distilled Brazilian pulse from Marin resident Vince Guaraldi, who scored a Grammy Award for his 1962 standard “Cast Your Fate to the Wind.” A few years later, Guaraldi earned international fame with his infectuously grooving scores for a succession of “Peanuts” television specials. But Vuckovich, the only musician mentored by Guaraldi, has worked to make sure that his teacher’s musical breadth isn’t forgotten.

“Most of the Vince Guaraldi tributes are ‘Peanuts,’ which is clever, catchy music,” Vuckovich says. “But you don’t hear his Brazilian and jazz side from his work with Bola Sete. They don’t play the Afro-Cuban montunos he explored. I try to show people the true range of Vince’s music.”

Guaraldi recognized Vuckovich’s excellent ear early on and started sending him out as a sub in his place for gigs with vocalists like David Allyn and Irene Kral. His gift for supporting singers landed him a breakthrough gig with vocalese legend Jon Hendricks, who hired Vuckovich in 1965 for his long-running San Francisco show “Evolution of the Blues.”

Often at his most lyrical supplying lush chords for singers, Vuckovich accompanies one of the Bay Area’s finest, Jackie Ryan, on Dec. 17 at San Rafael’s JB Piano Company, where he has presented a series of excellent concerts in recent years. The show features an all-star Latin jazz trio with John Santos and bassist Jeff Chambers (who joined Vuckovich backing Ryan on her breakthrough studio album, 2002’s “Passion Flower”).

Ryan, who grew up in a Mexican and Irish family in Marin, first connected with Vuckovich when she sat in with him on the anguished bolero “Historia de un Amor” (a song included on “Passion Flower”). She immediately felt a connection so deep she thought “that perhaps we subconsciously recognized in each other’s music a subtle Gypsy connection, Larry being from Yugoslavia and my maternal great-grandfather being from Spain,” she says.

“As well as the fact that I resonated with the jazz music and blues styles of the ’40s and ’50s that he plays. I identify with that era, because that’s the music I listened to and learned from. That’s my sound, but for Larry, that was his era. He is that music.”

His most profound musical relationship stretches back more than five decades to “Evolution of the Blues,” when he first started performing with reed master Noel Jewkes. Vuckovich treasures the enduring relationship (“he’s so tuned into the heart of jazz,” he says), whether the two are playing together in a large ensemble or an intimate conversational duo, like the Dec. 4 show at Oakland’s Piedmont Piano. The concert also offers the rare opportunity to catch Vuckovich playing a solo, the ultimate test for a jazz pianist.

“It’s all about being an orchestra,” he says. “The whole thing becomes a connection of statements, and it’s really challenging to make it interesting and attractive. The hardest thing is playing rubato in solo piano. Gypsies are the masters, creating their own rhythms and space without a steady rhythm, making it rhapsodic and meaningful.”

His Balkan roots don’t always make it to the surface in Vuckovich’s music, but with three or four soulful traditions at his fingertips, he turns every performance into a transporting excursion.