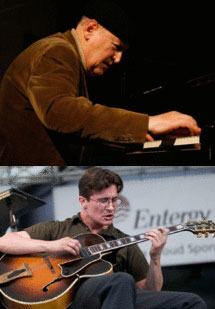 For this special event, Larry will be joined by Ilya Lushtak. Russian born, New York based guitarist, Ilya Lushtak has been an important part of the New York jazz scene since the mid-nineties, having worked extensively with legendary jazz figures. Ilya's major influences on guitar come from Wes Montgomery, Kenny Burrell, and Grant Green. As well as performing, Ilya is the owner of Lineage Records having recorded and played with such greats as Hank Jones, Barry Harris, Cedar Walton, Jimmy Cobb, Frank Wess and numerous others. Don't miss this rare opportunity to hear Ilya, a new generation guitarist, continuing the legacy of the soulful, swinging jazz guitar style.

Rounding out the trio this Sunday at the Sound Room is the world-class bassist Doug Miller. Doug's impressive history started with being mentored by the acclaimed bassist John Clayton, who is very high on Doug's ability. Doug has performed with jazz masters such as James Moody, Mel Lewis, Jimmy Cobb, Count Basie Orchestra, just to name a few.

Besides the classic bebop repertoire presented this Sunday, which will include the music of Charlie Parker, Dizzy Gillespie, Dexter Gordon & Sonny Clark, the program will also include some of Larry Vuckovich's Beyond Category selections covering the Balkan/Middle Eastern elements, jazz funk/blues, Brazilian/Latin selections, as well as tango jazz, flamenco flavors and more.