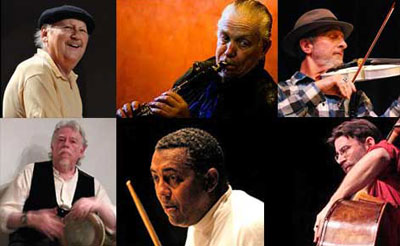 Larry Vukovich is a musical treasure, a Bay Area jazz legend who has played with a pantheon of the greats, from Vince Guaraldi to Billy Higgins, from Charlie Haden to Mel Tormé. He has appeared as a sideman on 17 albums and as band leader on 13 more, including his latest, Somethin' Special, which the website Jazz Music calls "a winner, a thoroughbred, a jazz music Secretariat" and praises for its "soul and spirit." All About Jazz calls it "a lovely album, beautifully performed" and applauds Larry's "sparklingly delicate solos." He's a master of straight ahead jazz, and also a pioneer in the fusion of jazz and world music, which is where the Blue Balkan Beyond Category Ensemble comes in. The ensemble features Eric Golub on violin, Noel Jewkes on reeds, Vince Delgado on dumbek and other Middle Eastern percussion, Doug Miller on bass, Chuck McPherson on drums, and Larry on piano. Together, they meld the music of Larry's Balkan roots with the modern jazz tradition of Ellington, Coltrane, and Monk. The result, in the words of the Toronto Globe and Mail, shows off Larry's "taste for both the exotic and the exquisite."

Born in the former Yogoslavia, Larry made it to the Bay Area at age 14, in 1951, at the height of San Francisco's flourishing jazz scene. He studied with Vince Guaraldi, sat in with John Handy and saxophonist Brew Moore, became house pianist at the Keystone Korner, began a 25-year musical relationship with Jon Hendricks, toured Europe with Dexter Gordon and Philly Joe Jones, spent half a decade in New York City, playing clubs like the Village Vanguard and the Blue Note, and circled back to San Francisco, which proclaimed Larry Vukovich Day on his birthday in 2007. He now lives in Calistoga, and it's a treat to have him at the Freight with his stellar band.