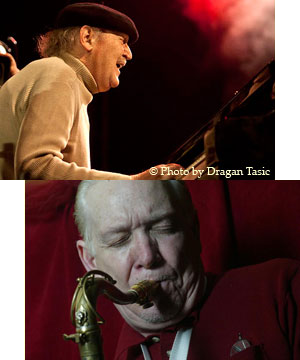 Noel Jewkes is one of the premier saxophone players in Northern California. He is a master of several instruments and styles, plays Lester Young tenor sax style as well as avant-garde sounds of John Coltrane, and on clarinet, recalls the traditional style of Barney Bigard and on alto sax, the bebop language of Bird. He has worked in the San Francisco Bay Area for more than 35 years, and has played and/or recorded with Jon Hendricks, Mel Tormé, Billy Eckstine, Rosemary Clooney, Wesla Whitfield, Mary Stallings, Paula West, Mike Greensill, Lavay Smith, Bill Bell, Mimi Fox, Graham Bruce, Bobbe Norris, Larry Dunlap, Pat Yankee and Jerry Hahn, as well as his own ensembles. He has appeared on several of Larry Vuckvich’s albums, including his current one, “Somthin’ Special.” He was on stage at the legendary Fillmore Street nightspot Bop City, and participated in the late ’60s San Francisco rock scene. as well as jazz. His septet, Legato Express, plays and records contemporary music, including some of his own compositions and arrangements. www.noeljewkes.com