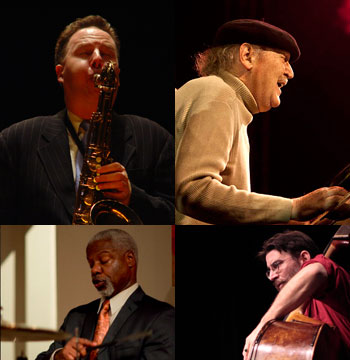 Presented by the Piedmont Piano Company

Harry Allen, with 30 recordings to his credit - three of them Gold Disc Award winners from Japan's Swing Journal – is cited as an authentic interpreter of the classic style of tenor saxophone. Melodically inventive, naturally swinging, he continues the lineage of Lester Young, Stan Getz, Zoot Sims, and Flip Phillips, while adding his own personal voice.

Gene Lees writes, "Stan Getz was once asked his idea of the perfect tenor saxophone soloist. His answer was, 'My technique, Al Cohn's ideas, and Zoot's time.' The fulfillment of that ideal may well be embodied in... Harry Allen."

Swing Bros. recording artist Harry Allen has over forty recordings to his name. Three of Harry's CDs have won Gold Disc Awards from Japan's Swing Journal Magazine, and his CD Tenors Anyone? won both the Gold Disc Award and the New Star Award. His recordings have made the top ten list for favorite new releases in Swing Journal Magazine's reader's poll and Jazz Journal International's critic's poll for 1997, and Eu Nao Quero Dancar (I Won't Dance), the third Gold Disc Award winner, was voted second for album of the year for 1998 by Swing Journal Magazine’s reader’s poll. The Harry Allen - Joe Cohn Quartet won the New York Nightlife Award for Outstanding Jazz Combo Performance of 2006 and was nominated for Best Jazz Combo by the Jazz Journalists Association for the same year. Harry also won the 2010 New York Nightlife Award for Best Jazz Solo.

Harry is featured on many of John Pizzarelli's recordings including the soundtrack and an on-screen cameo in the feature film "The Out of Towners," starring Steve Martin and Goldie Hawn. He has also done a series of commercials for ESPN starring Robert Goulet.

Harry was born in Washington D.C. in 1966, and was raised in Los Angeles, CA and Burrillville, RI. He received a Bachelor of Arts degree in music in 1988 from Rutgers University in New Jersey, and currently resides in New York City. harryallenjazz.com

Larry Vuckovich has won acclaim from critics and jazz audiences for his deeply imaginative style and repertoire heard at prestigious North American and European jazz clubs, concert halls and festivals. The New York Times notes that his unique outlook and collection of influences “set him apart from most pianists who are heard regularly in New York.” The Village Voice comments on his “book of piano gems that will keep you guessing.” The Toronto Globe and Mail calls him “a musician who sits apart from the rest by virtue ... of his taste for both the exotic and the exquisite.” He has played with jazz greats from several influences: Dexter Gordon, Philly Joe Jones, Mel Tormé, Don Byas, and Red Norvo to today’s artists: Charlie Haden, Bobby Hutcherson, Bobby McFerrin, Tom Harrell, and Charles McPherson. He led the Keystone Korner house trio in San Francisco for five years, before moving to the New York scene, where he played at all the top clubs. When he returned home, Larry later headed the Grand Hyatt’s Club 36 music program, which during his tenure, became a San Francisco Jazz Festival venue. Larry presented weeklong theme shows there and at Kimballs East/West, Yoshi’s, and The Bach, and was artistic director of the former Napa Valley Jazz Festival in Yountville. He also performed as a guest of Marian McPartland on her NPR show, Piano Jazz. larryvuckovich.com

Doug Miller, top bassist on the Seattle jazz scene until his move to Marin three years ago, studied with Ray Brown protégé John Clayton, considering him one of his most important mentors. He also worked in New York with Mel Lewis, appearing regularly with pianist Ram Ramirez, composer of the jazz standard "Lover Man," performing with a wide range of top players in bebop and Brazilian jazz. dougmillermusic.com/

Leon Joyce, Jr. is a former Chicago-based drummer who was part of the Ramsey Lewis Trio for nine years. He has worked with Nancy Wilson, Smokey Robinson, Monty Alexander, James Carter, Clark Terry, Ellis Marsallis, Billy Harper, and besides heading his own group, performs/tours with the Sistah Monica Band, and the Jamie Davis Quintet. leonjoycejr.com