The internationally acclaimed vocalist Jackie Ryan returns to the piano store. Jackie, who sings in five languages, will present an evening of music from the American Songbook, as well as jazz and world music classics. Her current CD, Listen Here, featuring the renowned, Grammy-winning bassist John Clayton and his son, the rising young Grammy-nominated pianist Gerald Clayton, with their quintet, placed at #1 for airplay on national jazz radio charts, It remained in the top spot for four weeks. 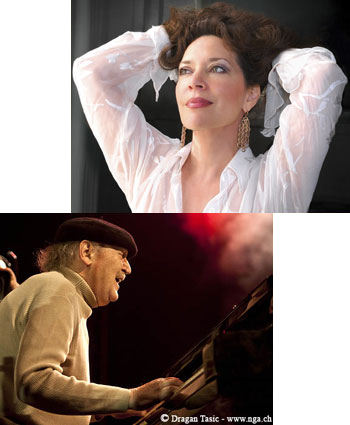 Refreshments and Mediterranean treats will be served.

Jackie Ryan, one of the most versatile vocalists in jazz, possesses a beautiful contralto voice that reaches three-and-a-half octaves and has a wide-ranging repertoire of rarely-heard standards, jazz-bebop classics/vocalese, Latin American boleros, Brazilian bossas, soulful blues and gospel, also jazz interpretations of French and Italian standards. She has sung all over the world from the famous Ronnie Scott's Club in London (where she was asked to record for their label) to Jazz at Lincoln Center and Birdland in New York to Oakland's Yoshi's, as well as many of the major jazz festivals. NPR reviewed of one of her recordings, You and the Night and the Music: NPR Review. Jazz Times, calls her: “One of the outstanding jazz vocalists of her generation and, quite possibly, of all time ... rivaling the dexterous sass of Sarah Vaughan, the instinctive smarts of Carmen McRae ...” The London Guardian cites her “sweeping vocal powers ... Jackie Ryan’s chemistry of passion is truly sensational.” jackieryanmusic.com

Her piano partner for the evening is the dynamic, multi-faceted Larry Vuckovich, who is equally at home in world music/classically influenced modal jazz as he is with hard-swinging bebop, post-bop, contemporary jazz, and down-home blues. Larry and Jackie have a 20-year performance history together. They recorded Jackie’s beautiful Passion Flower CD in 2002, that includes a tribute to Billy Strayhorn and have appeared on many concert stages together in the U.S. and in Europe. Jazz Times calls Larry "...a pianist whose evocative touch and poetic (but unsentimental) sensibility convey the wisdom of deep musical life experience.”

Larry Vuckovich has won acclaim from critics and jazz audiences for his deeply imaginative style and repertoire heard at prestigious North American and European jazz clubs, concert halls and festivals. The New York Times notes that his unique outlook and collection of influences “set him apart from most pianists who are heard regularly in New York.” The Village Voice comments on his “book of piano gems that will keep you guessing.” The Toronto Globe and Mail calls him “a musician who sits apart from the rest by virtue ... of his taste for both the exotic and the exquisite.” He has played with jazz greats from several influences: Dexter Gordon, Philly Joe Jones, Mel Tormé, Don Byas, and Red Norvo to today’s artists: Charlie Haden, Bobby Hutcherson, Bobby McFerrin, Tom Harrell, and Charles McPherson. He led the Keystone Korner house trio in San Francisco for five years, before moving to the New York scene, where he played at all the top clubs. When he returned home, Larry later headed the Grand Hyatt’s Club 36 music program, which during his tenure, became a San Francisco Jazz Festival venue. Larry presented weeklong theme shows there and at Kimballs East/West, Yoshi’s, and The Bach, and was artistic director of the former Napa Valley Jazz Festival in Yountville. He also performed as a guest of Marian McPartland on her NPR show, Piano Jazz.