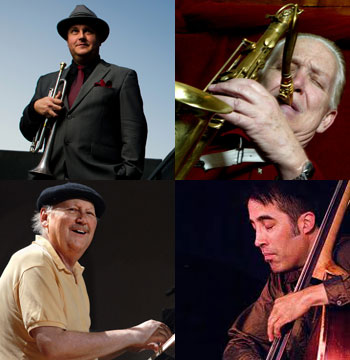 Presented by the Piedmont Piano Company

A presentation of one of the most exciting eras in jazz: Bebop / Hard Bop / Post Bop including the music of the pioneers from that period. The quintet will perform such classics as "Groovin' High," "Confirmation," "Bebop," "'Round Midnight," "Cheese Cake," "Blue Minor," "Sister Sadie," "Jean de Fleur," "Inner Urge," "Impressions," and more.

Joel Behrman, 37, grew up in a St. Louis suburb and, at age 9, started on his first instrument, trombone, a horn he still plays frequently today. He went on to earn his music degree at the University of Miami, studying with world-class improvisers like Ira Sullivan (another two-horn master) and playing countless salsa gigs on the local scene. He went on the road with KC and the Sunshine Band and eventually moved to the Bay Area, where several UM friends were already living. Behrman started playing with the New Orleans- inspired Brass the Monkey Brass Band on trumpet and trombone. He played funk with Lenny Williams, the former lead vocalist with Tower of Power; East Bay grease with Lydia Pense and Cold Blood, another vintage soul/R&B combo; and New Jack Swing with Tony! Toni! Toné! -- all gigs that required him to hone his trumpet chops and really develop his technique. But the most important gig was joining swing/blues vocalist Lavay Smith and her Red Hot Skillet Lickers. These days Behrman is touring internationally with percussion star Sheila E., and also performing widely with her father, the Latin jazz great Pete Escovedo. He still gets gigs as a trombonist, but the trumpet has increasingly become his primary creative vehicle, to the point where he didn't think twice about playing the horn exclusively on his debut album Steppin' Back.

Noel Jewkes is a master of several instruments and styles, he is at home performing Lester Young tenor sax style as well as the avant-garde sounds of John Coltrane. He is also one of the top clarinetists in jazz today, who can recall the traditional style of Barney Bigard and the bebop language of Bird. Noel is one of the premier saxophonists in Northern California, and has been part of the San Francisco music since the '60s, when he played with a number of blues and rock bands, including those of Michael Bloomfield and Nick Gravenites. Moving to San Francisco in the '60s, he performed regularly with Jon Hendricks, appearing on Jon's In Person at the Trident album. He toured with Jon in the Evolution of the Blues production with Jimmy Witherspoon, and also worked with Billy Eckstine, Mel Tormé, and Rosemary Clooney. Jewkes has performed and recorded with Jerry Hahn, Jack DeJohnette, and Ron McClure, and more recently with Larry Vuckovich, Dave Ellis, Mary Stallings, Paula West, Weslia Whitfield, and Mimi Fox. Phil Elwood, late SF Examiner critic, wrote: "I don't know of a better contemporary modern saxman anywhere." noeljewkes.com.

Larry Vuckovich brings an authenticity and musical depth to his music drawn from his deep experiences of working with legends from various jazz influences from Dexter Gordon, Philly Joe Jones, Don Byas, Jon Hendricks and Billie Higgins to today's masters, Tom Harrell, Charles McPherson Charlie Haden. He's played with a Who's Who listing of jazz masters during his years on the New York and international club and festival scenes, and as house pianist at both Keystone Korner in San Francisco and at the Domicile in Munich. He also reflects influences stemming from his Balkan, Montenegrin birthplace that have earned him recognition as a pioneer in jazz-world music, culminating in his 1980 LP, Blue Balkan, with noted vibraphonist Bobby Hutcherson. Its reissue with added material won a Village Voice pick among the top jazz CDs of 2002.

He has recorded on such labels as Concord Jazz, Palo Alto Jazz, Inner City Records, Hot House, and currently on his own Tetrachord Music label, producing top charting CDs, including his current Somethin' Special with guest tenor saxophonist Scott Hamilton. The 2010 CD ranked #3 on the national jazz radio charts, remaining on the charts for seven months. He has brought his Jazz-Latin quartet to many prominent venues, including Lincoln Center's Dizzy's Club Coca Cola in New York, where he also appeared as a guest and performed with pianist Marian McPartland on her popular Piano Jazz show, aired on NPR affiliates globally. He has also drawn the attention of the American film world, including noted critic Leonard Maltin, who has written highly favorable reviews of his recent CDs. larryvuckovich.com.

Bassists John Wiitala has worked with some of the greatest names in jazz, including Joe Henderson, Junior Cook, Charlie Rouse, James Moody, Bud Shank, Scott Hamiltoon and Cecil Payne. He has toured with Richie Cole, Arturo Sandoval, Shorty Rogers, and Jessica Williams, and has played at jazz festivals around the world, including Monterey, North Sea, Montreux, Detriot, and JVC/Concord. His recording credits include work with Scott Hamilton, Jessica Williams, Mark Levine, as well as Anton Schwartz.

Dummer Jimmy Gallagher is a rising young player on the Bay Area jazz scene, whom many seasoned Bay Area jazz musicians are praising for a style of playing that reflects a whole lineage of jazz drummers, yet is uniquely his own style. The Mendocino native who won a scholarship to the Berklee College of Music in Boston, has performed with jazz greats Eric Alexander, Ray Drummond, Marcus Belgrave, Wycliffe Gordon, Dayna Stevens, John Handy, and Andrew Speight.