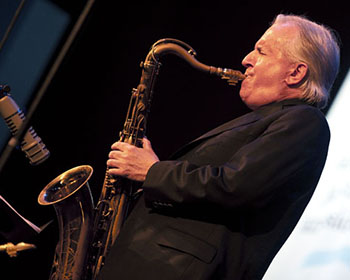 From the land of tenor giants

Scott extends the legacy of Ben Webster and Coleman Hawkins with that big tenor sound. In 1977 he formed his own quartet, the same year Carl Jefferson began recording him for his Concord record label. More than 40 albums later he is still recording for them, many under his own leadership. He's recorded albums with the likes of Dave McKenna, Woody Herman, Tony Bennett, Gerry Mulligan, Flip Phillips, and Rosemary Clooney.

Here is fellow tenor saxophonist & writer, Dave Gelly: "Following a Scott Hamilton solo is like listening to a great conversationalist in full flow. First comes the voice, the inimitable, assured sound of his tenor saxophone, then the informal style and finally the amazing fluency and eloquent command of the jazz language."

Welcome back Scott, small wonder you are in demand the world over!