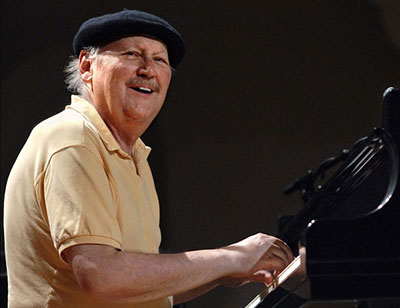 Jazz veteran Larry Vuckovich to tickle the ivories in Sebastopol

In show business, the word legend is overused with casual abandon, but veteran Bay Area jazz pianist Larry Vuckovich could make a legitimate claim on the title, at least in regional terms.

Since coming to the Bay Area as an immigrant from the tiny Balkan nation of Montenegero in 1950s, Vuckovich has become a jazz scene mainstay, performing with dozens of the major names in the genre.

"My life has been like a movie, man," said Vuckovich, by phone from his home in Calistoga, where he has lived for the past 12 years.

Still working the keyboards at age 82, Vuckovich will bring his trio, featuring rising young guitarist Kai Lyons and veteran bassist Jeff Chambers, to the Sebastopol Center for the Arts at 4:30 p.m. Sunday, Jan. 20 Even though he has worked jazz greats of the past — pianist and composer Vince Guaraldi (famous for "Peanuts" TV specials), singers Tony Bennett and Mel Torme and saxophonists Dexter Gordon and Eddie "Cleanhead" Vinson — Vuckovich refuses to stay stuck in the past.

"I don't want to be dated," he said. "My music is known to go beyond categories. I can play avant garde, but you've still got to have soul. You have to absorb everything."

In addition to his trio, Vuckovich also performs around the region with his All-Star Bay Area Sextet, which recently played a sold-out show at Yoshi's in Oakland, and for decades, has performed with his 18-piece big band.

Even though, Vuckovich is best-known in Northern California, he hasn't been limited by its boundaries, playing gigs in New York and touring on the East Coast and in Europe.

Having played with uncountable musicians in the past, including many top jazz stars, Vuckovich said he's still excited about working with the newest member of his trio, 23-year-old guitarist Kai Lyons.

"It has a nice swing feeling, but also, you can play everything," Vuckovich said. "You don't have to be limited."

You can reach staff writer Dan Taylor at 707-521-5243 or dan.taylor@pressdemocrat.com. On Twitter @danarts.